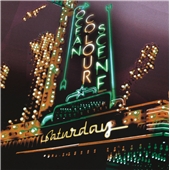 'Saturday' is Britpop band Ocean Colour Scene's ninth studio album and marks the 20th anniversary of their formation in 1990. After touring with Oasis in 1995 and chart success with 'Moseley Shoals', Ocean Colour Scene continued to release new material as well as a stream of successful live albums. 'Saturday' continues with the band's brand of retro-oriented rock and was recorded at the iconic Rockfield studios.